The Arctic Games are back for round 2#

It’s time. Round 2 of the Arctic Games is here.

Round 1 closed in late December 2022, with tons of lessons learned and incredible feedback received from our Arctic gladiators.

For round 2, the Arctic build has been improved with some major new features, tradeable assets and UX refinements.

Here’s what to expect.

The Arctic Games is a trading competition where users interact with a testnet Float Arctic deployment and compete to become the best trader of leveraged tokens.

Like round 1, round 2 will be closed. Traders will be selected using rigorous criteria, explained below.

Users will become Arctic Gladiators and be airdropped Arctic Fake Coins (AFCs) on Polygon’s Mumbai testnet. These AFCs have no monetary value and are non-transferable – they can only be used with the round 2 Arctic contracts.

Gladiators will be judged purely on profit and loss (PnL). At the end of round 2 all open positions in Float Arctic will revert to AFCs in user wallets. PnL will be calculated based on how much their AFC stash grew, or shrank, throughout the competition.

Winners will be announced and prizes will be distributed in the days after the competition.

Users do not have to deploy any funds with real world value while trading in round 2.

The winners of round 2 will receive prizes in DAI, as well as unique NFTs marking their glorious performance.

All Gladiators who participate in round 2 will also qualify for later rounds in the Arctic Games. Each round gets bigger, and better.

To be eligible for prizes users must follow the rules of the Arctic Games. These rules include that Gladiators must make their first trades within 48 hours of the competition beginning, and that they must make at least three trades by the end of the competition.

To participate in round 2, you have to pledge yourselves to the Arctic Games. To do that, you need to initiate a transaction, committing your intention to trade on-chain.

Then you must proceed to the Arctic Games Guild and connect the wallet that made your pledge transaction. 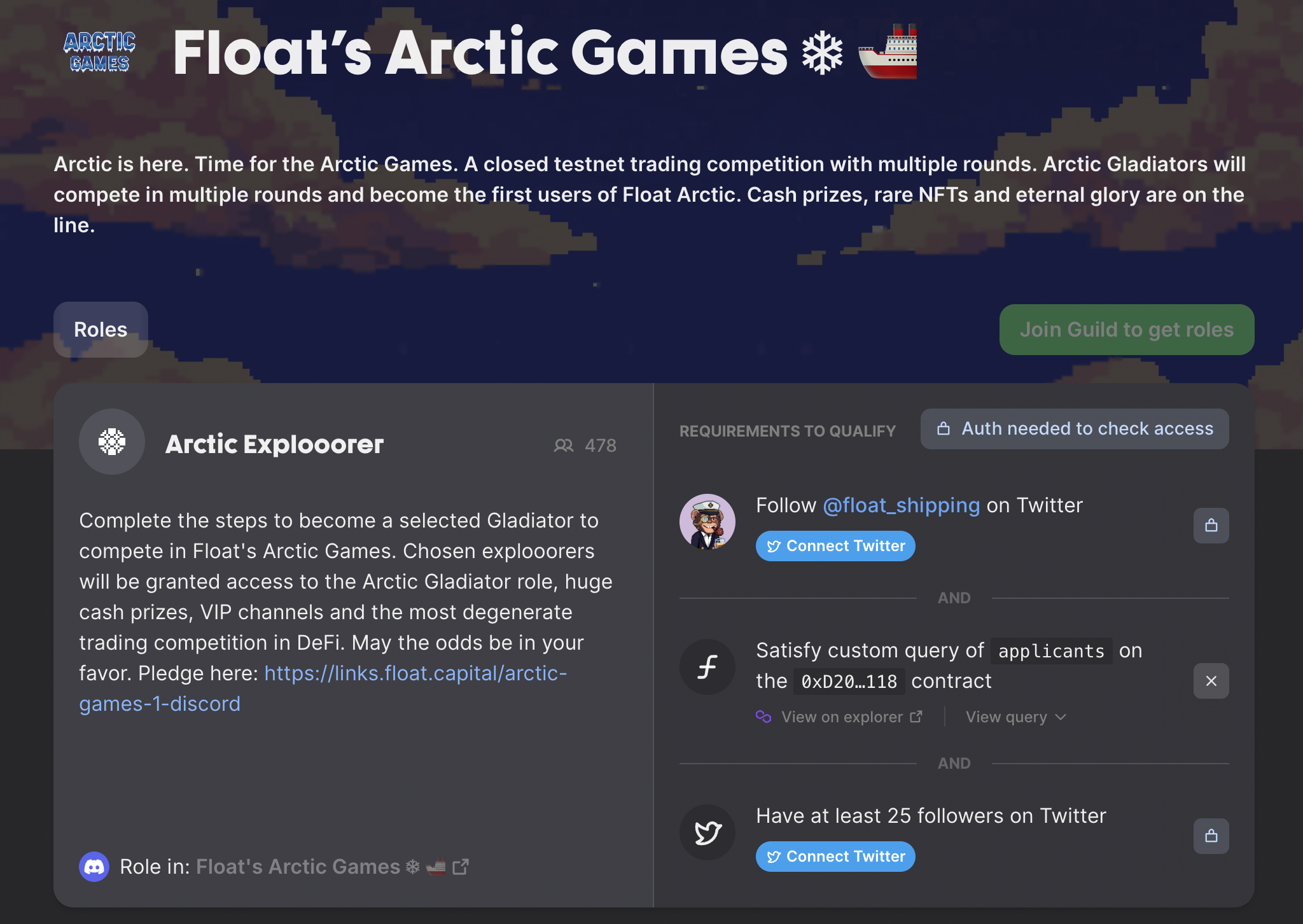 Finally, connect your Discord handle and Twitter to the Guild, to help us keep Sybil attackers out of the competition.

Once these steps have been completed, you will receive the Arctic Explooorer role in the Float Discord.

On the 23rd of January at 11:00 UTC we’ll close pledges and choose the round 2 Gladiators. Selected addresses will be added to an allowlist for the Arctic Gladiator role in Guild, and automatically receive the role in the Float Discord.

Addresses with histories and assets that verify them as DeFi power users will be guaranteed the Gladiator role. That includes wallets that were heavy users of the Float Alpha, all holders of DegenScore Beacons, all holders of the Phaver SBT, and all members of the A.P. Morgan Sailing Club. Gladiator roles are first come first serve – so if too many addresses from these communities apply, not all may get in.

Gladiators from round 1 will keep their role, and automatically be eligible for round 2.

If you aren’t selected for round 2, don’t worry. Make sure you hold onto your Arctic Explooorer role, and you’ll still be eligible for later rounds.

What is Float Arctic#

Float allows you to mint and trade leveraged tokens, with fixed price exposure and no liquidations, fully on-chain. Float Arctic is the latest deployment of the protocol. It uses a powerful multi-pool architecture which allows for users to mint leveraged tokens and shift between their existing tokens and any other token offered by Arctic, each in one click.

The Float team puts security and user safety first. While we refine the protocol, Arctic is only deployed on Polygon’s Mumbai testnet.

Learn more about Arctic's new mechanism in our docs.

Using DeFi is high risk. Trading with leverage is high risk. We do everything we can to protect our users by putting our contracts through rigorous audits, clearly communicating the risks and fees involved, and more. However, it is impossible to 100% guarantee the safety of your funds.

Before using Float make sure you understand the mechanisms that will affect your position by reading our docs, and our risks blog. Do not use any funds that you are not willing to lose.

Get live updates on new deployments, new features and opportunities to contribute on our Twitter. Or, meet the team and hang out in our Discord.